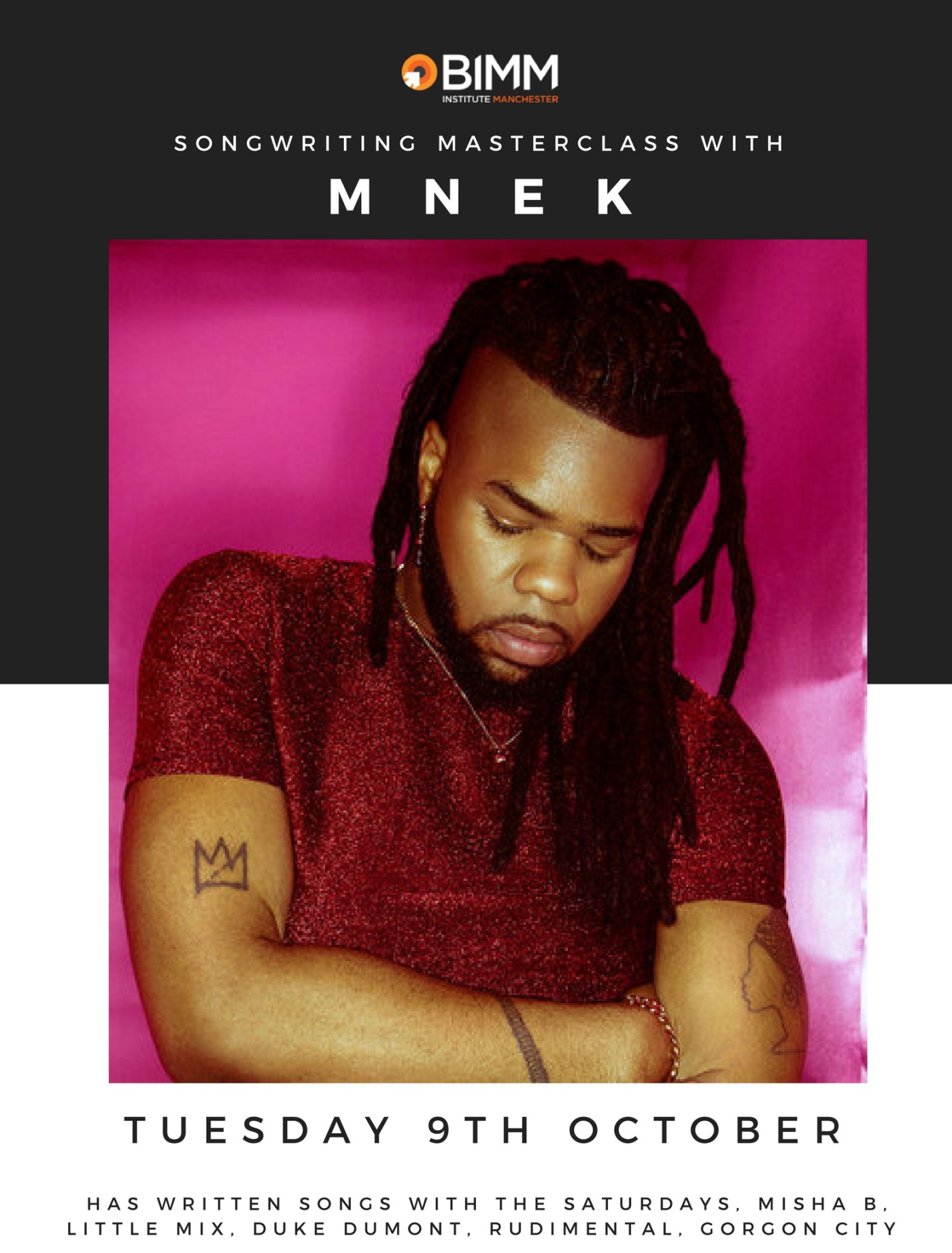 MNEK is a Grammy nominated writer, producer and singer. He has had multiple chart successes, such as the top ten hits, Ready For Your Love, Never Forget You and Blinded By Your Grace Pt 2. I was lucky enough to catch his song writing masterclass, hosted by BBC radio presenter Natalie- Eve Williams and find out how he became the go to songwriter for the likes of Beyoncé.

It started at the age of 14, during the era of Myspace, which MNEK (whose real name is Uzoechi Osisioma Emenike) recalls using to spam every single one of his favourite artists with his demos. If you’re wondering how a 14 year old makes demos, him and his brother created a DIY recording studio in their garage, which included a microphone and his mum’s tights as recording apparatus.  But Uzoechi believes young budding songwriters need to get into the industry and surround themselves with other people who are also career driven, as he remembers being the only person in school who knew what they wanted to do as a job. But by all means make a studio using your mum’s tights if you feel like it.

The triple threat hasn’t always been writing meaningful lyrics for global artists such as Beyoncé, Madonna and Christina Aguilera. His first song was about Pen and Paper, because he claims he hadn’t experienced enough in life to talk about. Since then he has talked about his sexuality referenced in the song Colour ft Hailee Steinfield, referred to by Billboard as a ‘LGBTQ modern anthem’. He has also written about his success in the industry, which includes winning an ASCAP Vanguard Award for his contribution to song writing. This is shown in his debut album Language, which was released last month, with the song Correct, in which he says ‘I was making fame before Year 7 begun, I was getting paid before I was getting drunk.’

I asked MNEK whether he preferred writing for other artists or making hits out of his creations by singing on them himself, he responded saying ‘I just see myself as a person that makes music, I enjoy both, I enjoy song writing whether it’s telling my own story or helping someone else tell theirs.’  He laughed as talking about this triggered a memory of the time he produced and co-wrote song Never Forget You for Zara Larsson and then decided he wanted to sing a verse on the track causing a dispute between himself and Zara’s management. It proved a good move to make, as the song peaked at number 5 on the Official Charts.

Expect to continue seeing MNEK’s name on the charts and awards shortlists, perhaps with songs from genres he isn’t usually featured in. As he would love to strip back and record a Bond theme esque song with no tempo, just a piano and his vocals. Who knows, he could be following in the footsteps of fellow British artist Sam Smith and performing the next James Bond theme song.

This site uses Akismet to reduce spam. Learn how your comment data is processed.

This blog is run by me (Katie Litherland) I am a 21 year old Music Journalist, studying at The British and Irish Modern Music institute in Manchester. I have set this blog up to upload some of my music reviews, any feedback and suggestions would be amazing. If you seem like you have a similar music taste to me, I have my own radio show on www.howfenradio.co.uk. My show ‘Festival Feels’ is on every Monday 4-5pm, in which I will be playing rock, indie and pop festival anthems! Enjoy!